Frameworks for IT Value and Leadership

The following 6 tools and frameworks outline the CIO Executive Council’s most important pieces of intellectual capital and represent the thought leadership of hundreds of global CIOs spanning over half a decade. Combined they convey the Council’s position on the current and future-state CIO role and the value that IT should be creating for the enterprise – they offer the IT community an intriguing and comprehensive roadmap for continued success.

NOTE: Each of the following frameworks builds upon the prior, culminating in the Journey to the Future-State framework.

Unlike most other business functions, IT has no established lexicon to explain what it does and how it should work. To address this gap, a team of Council CIO members created a framework to comprehensively describe what exactly IT does to create value. Learn more 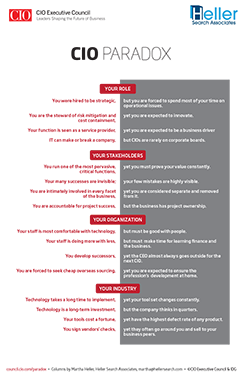 As there are timeless leadership principles underlying IT value, there are unfortunately also timeless challenges that thwart the IT organisations efforts and make for a rocky path to CIO success. These are the inherent contradictions we call the CIO Paradox. Learn more 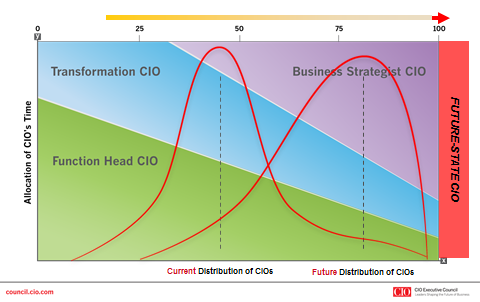 Council members recognised that their own roles were shifting from a predominately internal, IT functions focus to one that was more business strategy oriented and external facing. The problem was that whilst this shift is good for business value, many IT leaders were not well equipped for the demands of such a role shift. To address this, Council CIO members created a model outlining 3 typical leadership approaches (or CIO archetypes) to the role, with an implied progression from the internal functional approach to the external business approach. Learn more 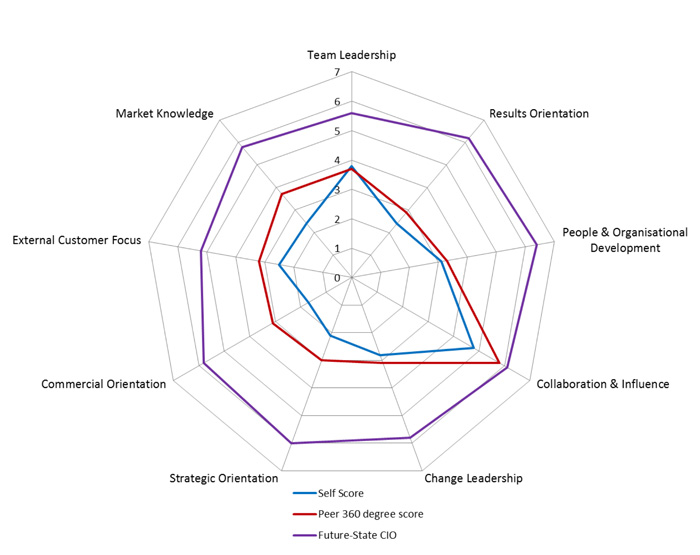 CIOs who want to shift their leadership focus beyond the IT function need to cultivate and emphasise leadership competencies that will equip them to lead effectively at the enterprise level and at the business strategy table. In 30 years of assessing C-level talent, global executive recruitment firm Egon Zehnder International determined that 9 competencies are core to c-level executive success. The CIO Executive Council has adapted these competencies specifically for the IT profession, applied them to the Future-State CIO Model, and built them into a self and 360-degree assessment program for CIOs and rising IT leaders. Learn more

The CIO Executive Council adapted the 9 core competencies crucial to C-level success specifically for the IT profession, applied them to The Future-State CIO® model, and built them into a 360˚ Future-State assessment tool for CIOs and rising IT leaders. Learn more

The Journey to the Future-State Framework®

At any given time a CIO will be working across each of the 3 archetypes however, we believe that the future of the role is to have CIOs spending less time at the operational level and more time delivering at the transformation and business strategy level. Learn more 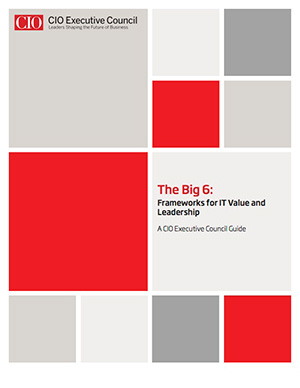 The Big 6 is an overview of the CIO Executive Council’s 6 most important pieces of intellectual capital. Representing the thought leadership of literally hundreds of global and local CIO’s spanning over half a decade. Learn more